Today we embark on strictly a scouting mission. My profile is, yes, fucking mindblowingly good, but it’s merely an unfinished husk at the moment and unlikely to truly emotionally manipulate any woman into sending me pictures of their boobs. That is, after all, all this online ‘Zero Hour Dating’ is really about. Today, we’re just looking at the options, seeing what kind of bear bating meat market the crust of the Earth has split open to reveal. I’m not physically rating these people- and you’re certainly not seeing pictures, you disgusting leches- everyone is beautiful, and not everyone possesses the psychological wherewithal to paint half their face blue. We’re all about people’s personal bio. And in that case it really doesn’t turn out that everyone is beautiful at all. In fact, many people are freaking munters.

So, into the depths we dive, I open up Bumble and…

Wait, what the fuck is that?

Does… Does that mean that two people have swiped right on my profile?? Two people have seen the guy named after Caroline Calloway, glitter face painted and wigged in a sort of high camp tribute to Mel Gibson’s ‘Braveheart’ and backed with a particularly asinine quote from ’50 Shades of Grey’ and thought ‘Yep, that’s the future father of my children, right there’? I mean, it makes sense- I did work out the science behind it- but it’s still shocking how quickly it worked. I guess that famous quote from Virginia Woolf is true- “Chicks be fucking nuts“. Italics author’s own. Well, these two women are obviously incredibly perverse, and I can already tell we’ll get on because of shared interests- we both think that I am incredibly good looking- so I’ll just click to see who my next wife and secret wife will be… 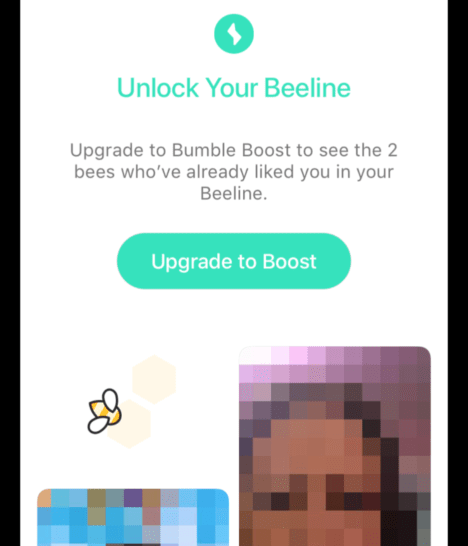 Awwwwwww what?! I hate Capitalism! Not only is it committing mass genocide on an entire generation of humans because of its hideous effects on their mental health, but now it’s playing games with its inhabitants’ love! You know in school when a kid used to send their friend to go and talk to their crush and say “My mate really fancies you”? Well, we’ve now constructed a society where it’s OK for some kids to casually stroll up to you and say “My mate fancies you. And if you give me enough money I’ll tell you who”. It’s disgusting! Screw you, Bumble Boost! I don’t need your charity! I’m sure if I went out swiping on my own, I’d easily track down these two fine women! Potentially, let’s be honest, the only two women with their heads properly screwed on. Be back soon, I’m off to find my next wife!!

OK, not a 100% successful first run, I’ll admit. Some people just didn’t strike me as being particularly interesting of adventurous, which are the two words I’d most use to describe myself.

I mean, obviously a BNP supporter, right? Swipe left. There were some people that I was genuinely worried wouldn’t be up to my intellectual standard.

I mean, how far are you into your training if you’ve only just grasped addition, subtraction, dividing and multiplying? I mean, fuck, that’s literally primary schools stuff. Maybe she is at primary school? You’re kind of a trainee anything when you’re at primary school. I’m not saying that’s necessarily  too young, I’m just arguing that she was a little unimaginative with her choice of what she’s training in. You’re a trainee everything and you chose accountant?? You could have said trainee astronaut, trainee wizard, trainee unicorn…! Swipe left.  I felt some women’s lack of confidence a bit unattractive. 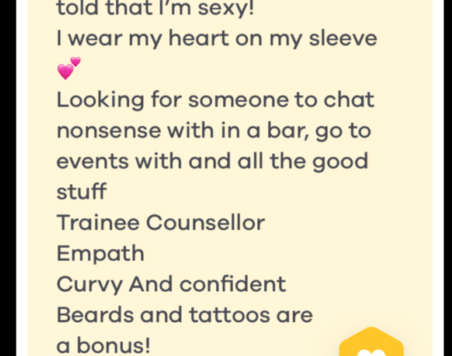 The rest of the bio isn’t much better. Another trainee?? When do I actually get to meet some proper, qualified professionals??

Swipe right. Our paranormal friend isn’t the only one with a lack of belief in her convictions:

Where to start with this one? The ‘apparently funny’ is disjointing enough, but to describe yourself as ‘uncomplicated’? Isn’t that just a polite way of saying someone’s stupid and a bit dull? Are we speaking the same language here? I want the women who are very complicated, I want women who masturbate to the Times’s Cryptic crossword! While I watch. Ah, shit, I made it dirty. I was also very confused with her statement that she has ‘no kids of her own’. I mean… if you’re single… aren’t all kids you’re own…? Answers in the comments please, I’m no language expert. In fact, you know me, you know how I roll, you know I’m always splitting the infinite, I’m no grammar Nazi. But there has to be a line, doesn’t there?? 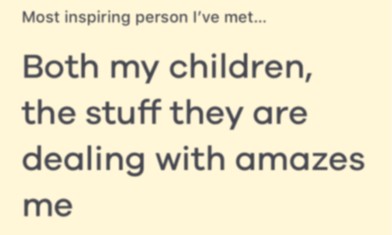 Wh… wh… what are you forcing your children to deal with…? Also, naming you’re own fucking children as the most inspiring people to you is some grade A narcissistic bullshit. Swipe left. Not quite as bonkers as:

I don’t even know how that works. I mean, being a little too much into your dog wasn’t uncommon. 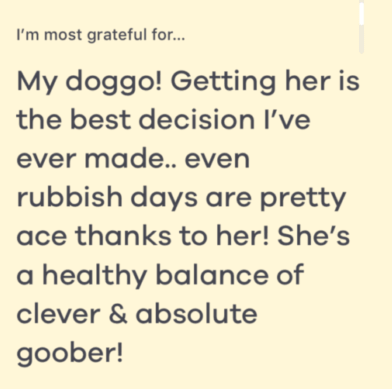 I can’t compete with that. Swipe left.

I don’t know how aware I was of this before I stopped drinking, but a lot- the vast majority– of people choose to define themselves with how much they love drinking.

Don’t get me wrong, I’m not addiction shaming, and if it weren’t for functional alcoholics none of us would be here today, I’m just concerned with the double standards- if I used a large chunk of my bio eulogising over my favourite painkillers (Gabapentin and Xanax, since you asked) wouldn’t the average reader assume I had a bit of an issue? And hold up, I’ve got to show you something else from one of the above alkies:

Pineapple on pizza. Is for pedos. The desire to include pineapple on your pizza toppings is symptomatic of paedophilia. What a statement. I mean, I like pineapple on my pizza! However, I also like sex with underage children, so her theory checks out. Swipe right. Hard. Some people were trying too hard:

On the opposite end, some people really weren’t trying to impress me at all:

Notice the tense. This isn’t an abstract ‘What would they describe you as’, this woman wants it on the record that her teacher when she was 10 years old openly admitted that she was an arsehole. Respect. Swipe right.

Really?? What did you do, kill some kids?? Swipe left! The most hideous glimpses into tortured souls comes when people name who their favourite dinner guests would be, which ranges from the dull 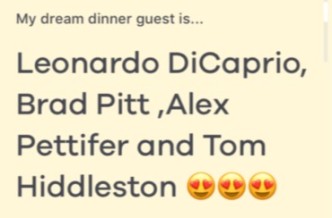 to the fucking bizarre

Actually, I would love to be at that dinner party, it’d be interesting t see who would delight the crowd more, Britain’s biggest selling author, possibly the most influential and lauded natural historian of his era, or the Burnley FC goalkeeper. Ooooh! This next one’s cool though!! 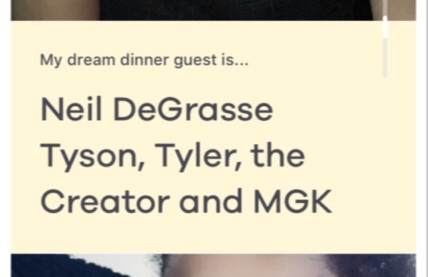 Bollocks. I super swiped her by accident. Now she’s going to be able to see that I really fancy her. She’s really hot. I’m a guy with a painted blue face. This will not end well. Also, I didn’t realise that MGK stood for ‘Machine Gun Kelly’. That’s not cool. Sigh…

Many women saw fit to mention ‘the current situation’:

Some people really mentioned it: 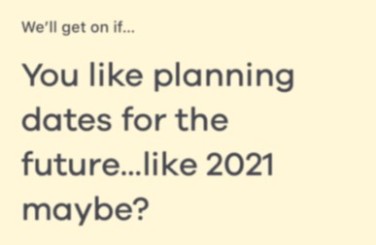 Yeah, they’re all the same person.

It wasn’t all bad though, there were some absolute gems. Some women were unafraid to make big statements:

I totally understand what you’re talking about and I hate that! Swipe right!

The only recorded use of the ‘C’ word on Bumble. Swipe right! 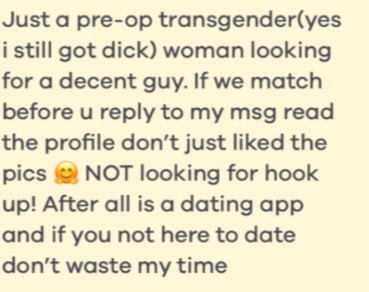 Gotta love that forthrightness and that confidence. Swipe right, obviously, the trans are welcome into the Palmer Palace of Poontang, with or without dick. It’s not the genitals of a woman that I find attractive, it’s the very being, and if trans people possess that being then they get a ticket. To be honest, I can’t imagine finding someone better than this, unless another person said…

I think I’ve found my soul mate. Although, admitting to liking wrestling is pretty unattractive, has she no shame? Do we have any other takers?

Mum, meet the mother of your grandchildren.

OK, I’m emotionally scarred enough to leave it for now. This isn’t going to be a daily feature going forward, I just got a litle overexcited over the start of it. It will start again next week, after I canvas some opinions from my female friends to add to my photo gallery and bio. Before that though, there’s an actual interview with Aqua Girl coming soon! You people are so lucky!!

4 thoughts on “Rumble in the Bumble pt.3”