I’ve not had as much of a personal relationship with many artists on this list as I have had with Rebecca Lucy Taylor, the sole guiding force behind the wonderful project Self Esteem. I mean, sure, I went out for a few meals with no.78, Billie Eilish, but that was more of a group thing, and to be honest we’re unlikely to meet up again after she told friends that me constantly getting drunk and telling her how much she reminded me of my ex-girlfriend at school* was making her feel ‘a bit weird’. Tsk, kids these days, ammi right?? Not allowed to say anything to the Snowflake Generation! I had a passionate- some people (and indeed a high court judge in an official statement on October 23rd) would say violent- one night sexual relationship with no.81, Mark Mulcahy, but that wasn’t really a long term thing, with Mark claiming he can’t even look at me anymore and only contacting me through his lawyer. And, of course, I guess I know no.63 a little bit, but no way near as I really should, and I should really make more time to get to know him, you feel me?

Quick note: if you ever hear a person refer to someone else as a ‘snowflake’, then you are well within your rights to assume that person has a history of violent sexual abuse and never talk to them again. Back to our show:

Me and Rebecca though? We go way back. We’re, like, best friends, yeah? She’s poured her heart out to me through this brilliant debut album and is extremely keen to engage with me by often posting to Twitter. We’re close pals. Which is only right, because I both bought her album* and went to see her gig at Manchester’s Band on the Wall on Friday 18th October, so she has to be my best friend, she fucking owes me!!

(*erm, actually, I might have illegally downloaded it… But I, like, supported her through listening to her music so she still totally fucking owes me, alright??)

Our long and- I’ll admit it- often fractious relationship began when I noticed her mention on Twitter that she considered telling people what haircut they should have to be one of her talents. Or something. There was some context surrounding it that meant it made more sense, honest, I just can’t can’t remember it. It so happened that my hair was an unkempt mess at the time. I have had a skinhead since I was 15 years old, mostly down to the fact that getting constantly mocked for having ginger hair kinda gets you down so I had always just decreed to have as little of it as possible. My membership in Combat 18 was just a happy coincidence, I keep having to reassure people that I’m actually pretty ambivalent towards the group’s policies, I’m mainly there because of the haircuts and the 10% Uber discount. At the start of 2019, a major life choice was made. Considering I’m in my late, late, late, late, late, late 20s, a lot of my male friends are actually starting to have problems losing their hair. Despite that fact that I have long never allowed it to grow longer than a book louse’s aglet, I do actually have a full head of hair. I really needed to take this chance to rub it in the faces of my baldy bastard friends. I decided to grow my hair. This is what I could achieve if I was trying to please!! Anyway, I’ve no idea what I’m supposed to be doing with this dumb mop of ginger fuzz above my eyebrows, so I enlisted the help of Rebecca:

Rebecca replied with this sage advice that I still don’t quite fully understand:

I think I gave these instructions to the barber, but he was Iranian and I’m still struggling with how to properly express ‘textured’ in Farsi, and I showed her the results:

Yeah, I’m not sure either, but nonetheless:

My reply was moderately funny, but unfortunately that was the end of the conversation. That’s cool, I know Rebecca’s a busy woman, she had her first major UK tour coming up, probably had to practice all the singing and the dancing and the stuff she does, I appreciate that, maybe she was already working on the Christmas song she would release at the end of the year, maybe she had to work on her piano skills for the special piano shows in December, it’s not easy to play the piano, remembering which key goes ‘dommmmmm‘ and which one goes ‘tiiiiiiing‘ and which ones go ‘bab-da-baba-daba-da-da!’, lot of work, I know, I appreciate that, I’ve got friends that I don’t see for ages because they’re so busy, I understand, Rebecca, don’t worry.

Then, a Tweet she sent in October set off a series of events that made me question my entire existence. It began when she posted a vote asking what t-shirts people would like to be able to buy on the tour that I was soon about to witness her on:

Now, there’s one obvious winner there, it’s the one I voted for and it’s the one that finally won, even though the results were far closer than I would have liked. A lot of the comments seemed to suggest why the result wasn’t as clear cut as obviously it should have been- there were a lot of men (only men) that seemed to take issue with the factual statement that squirt (do I have to explain what ‘squirt‘ is? Aren’t we all adults here?) was not urine. Because this was the internet, a lot of men (almost always only men) took issue with something that didn’t really fucking matter in order to inflict even the slightest blow to female authority. And there was me, trying to make it as clear as possible that I did (and still do) honestly really want that shirt. Shit broke out into nonsense to such an extent that Ms Lucy Taylor was moved to make a statement: 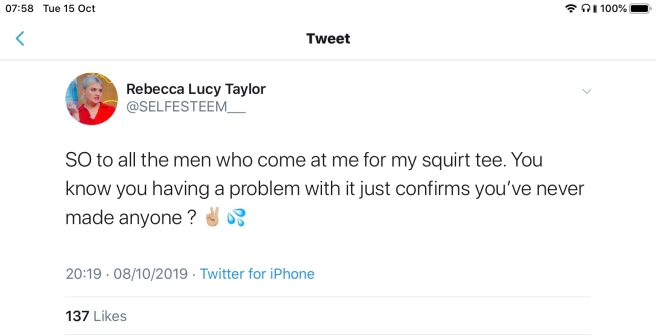 Initially, and incredibly embarrassingly, I did actually reply to that Tweet, stating once again that I really wanted the ‘Squirt Isn’t Wee’ shirt. To prove what, subconsciously? That I’ve actually made loads of women ejaculate? To announce to my BFF Rebecca that I was, unlike those other guys, a motherfucking sex God with an implied enormous penis?? So, so, so fucking pathetic, because I’m pathetic because I’m a man and because men are pathetic. Yeah, I know, men do loads and loads of great things- have you not heard Old Town Road?- but we are all, underneath it all, pretty fucking pathetic. I deleted the reply quickly as soon as I noticed the pitiful statement I was subconsciously attempting to make, before another reply caught my eye.

‘R…Reply Guy’… Wh-wh-what’s a ‘Reply Guy’…? I mean, I asked myself, and I read up on it, but I immediately knew what a ‘Reply Guy’ was and further research merely confirmed my suspicions. A ‘Reply Guy’ is usually married, usually in his 30s, has few followers and constantly replies with abrasive over familiarity to people’s Tweets, often multiple times to the same person. Oh, and these people are always women far younger than him.

The ‘Reply Guy’ is a curious phenomenon. Are these men all just aiming to belittle and minimise female experience? Do they honestly believe that they’re adding essential kindle to whatever subject the young woman has breached? Do they just want to be noticed by and interact with a woman who isn’t their wife? Do they just want to interact with a woman full stop?? It’s a varied and complex field of study, and thankfully two scientists created the Twitter handle @9replyguys to investigate and document the phenomenon, and were actually able to break down the ‘Reply Guy’ condition into nine further subcategories:

This is all important and worthwhile work, but as I read more into it my main focus was on something altogether more horrifying: was I a Reply Guy??

I began to look back at all my Tweets and replies, how many of the were directed at women (definitely a majority)? How many of them could fit into one of the nine ‘Reply Guy’ categories (fuck, a few!!)?? How many of them were at all worthwhile (Jesus fucking Christ, not that fucking many!!)??? How many Twitter followers did I have (fuck, man, sixty fucking eight?? What even am I???)????

Rebecca Lucy Taylor replied to one of my Tweets with haircut suggestions, it didn’t mean anything, she was probably just engaged in what Nacy Baym describes as ‘relational labour‘, where artists are now expected to engage with fans on Twitter as part of their work to ‘advertise’ themselves. Twitter’s whole business plan is that it fabricates what appear to be real connections with people all around the world, we feel like we are talking to people, when in fact we’re just given the chance to graffiti on their wall. Too many men use this opportunity to scrawl a huge cock and balls and then expect respect in return. I don’t know if I was a ‘Reply Guy’ before, but at least now I know enough to attempt to avoid becoming one in the future.

‘Compliments Please’, though!! Rather marvelous, some of the year’s most absolutely pristinely crafted pop music, with absolutely scathingly brilliant lyrics. Yeah, bit too many adjectives in that sentence, wasn’t there? I do have my own personal struggle with ‘Compliments Please’ though, as on paper it probably deserves to be much higher, but there’s something about the album that stops me going completely coo-koo gaga over it. Perhaps it’s a little too epic in places, with the musical high camp melodrama sometimes negatively affecting the direct dynamism of the lyrics.

Meh, whatever, it’s a great album. Buy it, don’t illegally download it, and most importantly never listen to a word I say

Have you taken this album off Bandcamp?? Fucking capitalism, man…

4 thoughts on “56 Self Esteem: Compliments Please”