OK, fair warning- maybe even a trigger warning, but I’ve got to be careful because some people get so fucking angry when you word a content warning that way*- but this post might go to some pretty dark places. I mean, I’m just going to talk about my life a bit, which is always going to be a bit dark, isn’t it? For you, I mean. I’m alright with it, I fucking live with it, but I appreciate how some people might get a bit uncomfortable. These people can just read my Princess Nokia bit again, that was pretty funny. I’m going to use the brilliant ‘B/X’ album as a jumping off point to talk about how I was ‘freed from my body’, then masterfully bring it back at the end to Don’t Do It Neil. It’ll be a fucking amazing post, and I don’t know why more people don’t read this blog, it’s fuckin’ straight fire. 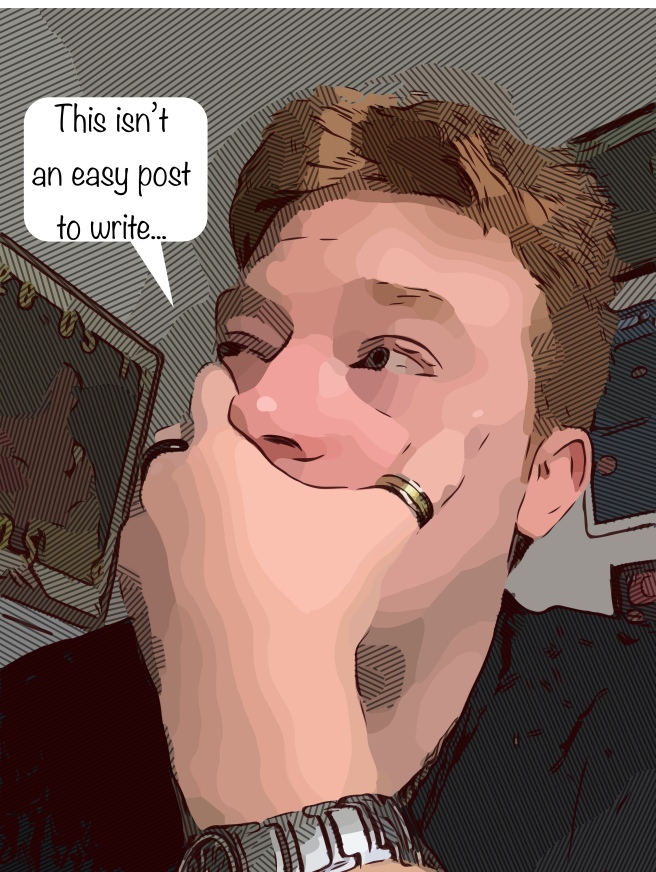 ‘B/X’ is an extremely sexy album. There are no caveats to it. It’s not about how great sex is as a… Or how sex feels when you’re a… It’s often just extolling the universal beautiful feeling when two (or, y’know, occasionally more…) people make a physical connection so deep that they can feel like they’re inside each other, both figuratively and perhaps literally. It’s how one animal can show their base appreciation and affection for another by, like, rubbing their bodies together. It’s fucking awesome, is what I’m saying.

I used to have a near obsessive and often debilitating relationship with sex. Sex was all I ever wanted, in literally any situation, and whatever task I would currently be executing, the end goal would always be to stick my little ginger willy in somebody. If I was washing my windows, the long term goal would be to convince any passing woman that a guy with windows that clean has to be some sort of sexual dynamo, and hence lead to us knocking testicles. I needed to fuck every woman* I met and I’ve never been able to properly psychologically explain. I definitely needed that amazing feeling of being intertwined with another person, I was definitely desperate for that complete sense of love that I got when someone allowed me to squeeze my sweaty body against them and allowed me access to every inch of their skin, but was there something more unpleasant underneath it all? Was this insatiable desire all about dominating and owning these women? Was I just trying to collect these women like they were Panini stickers rather than actual human beings? I’ve long been a staunch believer that if you’re a man who’s never allowed at least 51% of his female sexual partners to peg them then you are in fact a horrible misogynist. By the way, I was married for much of this period but- oh-hoh!- that’s a tale for another time.

(*I’m generally straight, but y’know, Kinsey Scale, sexuality is a spectrum, just fuck whomever you like, sexuality, strong and warm and wild and free, sexuality, your laws do not apply to me. Back in my more successful days, it was actually quite rare that I’d go out to a club and not go back to some girl’s house, but when I didn’t I’d just head to Manchester’s Canal Street and fuck some guy instead. I just… wanted… sex… with something…)

My relationship with sex was also closely aligned to my reliance on several mind deadening substances. A quick shout out to MDMA- sex on MDMA is amazing and being on it generally makes you appreciate the amazing things you already have and find new and wonderful ways to value your partner and give them pleasure. MDMA makes everything better and I can’t recommend it enough. Unfortunately, MDMA wasn’t always readily available, so in order to at least temporarily escape the living hell that was my own mind I all to often had to resort to alcohol. Alcohol is- and I’m aware of how hot and sizzling this take may appear- absolutely the worst drug. Fair disclosure though- you are about 34’000 times more likely to have sex if you’re drunk, your self-confidence gets the required boost and you tend to hang around places where similarly drunk people are more likely to have sex with you. If you fancy having sex tonight, go get drunk somewhere. It’s not all good though. It has the ability to raise your confidence to near cocaine levels, but can also amplify the lows to such an effect that there’s no obvious exit. Alcohol builds walls around your mind to the point where you can’t see past them to the ways out that are available to you. When I lived in China, drugs were a lot harder to come across, so I drank a lot of alcohol to attempt to escape my chronic and untreated bipolar disorder. This backfired rather unfortunately, when I threw myself from the window of my eighth story flat.

I actually survived, as you might have guessed, but my spine was kajiggered, many limbs were permanently defuncted and I was officially Disabled™.  In the 6 months I spent in hospital, it became clear that next to nothing below my waist was in full working order, as I spent much of my time slowly learning to walk and potty train myself again. Do you see where this is going?

One of the instruments that was unfortunately put permanently out of commission was my dear old willy. I attempted suicide, and all I got was a disability and impotence. Really bad deal, all considered. You could maybe build some kind of parable there, if you can be arsed. Write a song about it, I won’t ask for more than 80% royalties.

It’s a strange kind of impotence. Or maybe it’s a completely conventional impotence. I’ve only ever had one impotence, so I’ve nothing to compare it to. It’s not based on any mental issue, or perhaps tied to any of the items in the huge bag of prescriptions I pick up every month. Seriously, if you fancy buying and codeine, gabapentin, citalopram or something, just hit me up*. With me, the spirit is willing, but the flesh is limp. I still possess the mind, the thoughts and the mental images of a normal man with a working penis. I just… don’t possess…the penis… I still feel the desires, still get the downstairs butterflies, I still want the physical sensation of another person’s body, it’s just the strings have been cut that used to engage that particular marionette. In a strange way, rather than retreating into the white nationalism and revenge porn hell hole that one presumed impotence would always lead me, losing this physical basket making focal point has actually made me appreciate sex on a more intellectual level. Heterosexual sex is so fucking basic, isn’t it? Always revolving around what the man does with that ugly little parcel of flesh hanging between his legs. The willy goes in there then the willy has to do that then the willy gets put up there while the woman does that to the willy before the willy rather ridiculously does that– open your fucking minds, straight people! I still have sex- because of course I still have sex! I’m a fucking legend! Alex ‘Swordsman’ Palmer they call me! Fuckin’, hypersexual, me! Did you not hear what I said to Self Esteem?! Poontang Pie eater! #Ledge #SexBomb #Overcompensate- but now sex for me revolves more around conceiving inventive ways to ensure the other person has as much pleasure as possible. Now sex has been removed from initiating different plot twists and reveals to lead to the finale of me making an embarrassing face while I spooge nonsense juice from my lovehammer, lovemaking is free to develop outside the strangulating hold of mainstream expectations, and can often to to some ‘Official Sundance Selection‘ places. In a strange way, I have truly been freed from my body.

(*LEGAL NOTE: that was a joke! Remember, if I ever say anything legally dubious, then it was a joke! If you take it seriously, then… maybe…. No! It was almost definitely a joke!)

So, in the end, am I actually better after my suicide attempt…?

Absolutely fucking not! The confident and supernaturally charming sexpot writing the words that you’re currently reading (and, if the research is to be believed, furiously masturbating over) only exists after literal years of traumatic head examining and long, hard looks in the mirror. Right now, I’m not an example of how things can get better, I’m an example of how it’s possible to learn to live with almost anything and how you can make the best of fucking horrendous situations. I survived a suicide attempt that disabled me! That kind of fucks you up. But, I was given lemons and I made… I dunno… lemons are alright, I suppose… I guess I just learned to live with the lemons.

Which kiiiiiiiiiiiiiiiiiiiiiiiiiiiiiiiinda brings us back to Don’t Do It Neil. I was first introduced to Mabel Harper (for it is she) when she made a pretty banging split album with one of my favourite things, Aqua Girl. I might now even like her better. But don’t tell Aqua Girl that. ‘B/X’ is brilliant, blah blah blah, but part of the reason for me making my suicide attempt such a central feature of this review wasn’t just down to the sex thing. On November 8th Mabel posted a cryptic, confused and slightly terrifying video to her Twitter, of her standing on a bridge and struggling to think of the right words to say. Obviously wondering how best to explain… something… she was planning… to do… Thankfully, ‘B/X’ won’t be morbidly immortalised as the final work of a ‘troubled’ artist, it can still thankfully stand as a brilliant piece of work on its own terms after Mabel was involuntarily sectioned and put on suicide watch, with a GoFundMe set up to cover all of her costs that she lost while in hospital, support of her friends and community etc…

I’m not sure what the point of this post is. I seemed to have an idea in mind when I started, but all it’s ever going to lead to is unhelpful and boneheaded platitudes. Am I glad that my suicide attempt wasn’t successful? I guess, but that means nothing to Mabel, I may as well argue that life’s worth living because Dave Benson Philips seems really happy. Different people, different lives, different struggles. To paraphrase Tolstoy, all happy people are alike, but suicidal people are all suicidal in their very own way. Everything I say could just be a suicidal kid telling another suicidal kid that suicide ain’t the answer. It’s bunkum, it’s bullshit, it’s worthless.

Depression often isn’t based on logic. You could tell someone that they’re brilliant, that they have so many friends who care about them, that what they create is so wonderful, that their version of In A Dark Room is possibly better than the Aqua Girl original, but these things can often only make things worse. I know that I have all these things, so why do I still feel like this?! It can only make someone feel more worthless. Less worthfull… It can only make someone feel like… they have less worth… Sorry, really not the time for grammar semantics.

Life is worth living. Sometimes. It can be made to be worth living. Sometimes. There’s always a life after attempting suicide. Except when there’s not. There are no easy answers and anecdotal evidence is meaningless. But it’s possible to survive, it’s possible to prosper. I’m not going to cross my fingers behind my back and say that suicide isn’t the answer because, sometimes, it fucking is. It takes a lot of work to create a mental situation where it isn’t, all i can really say is that it’s worth it.

Alternatively, how easy is it to score MDMA in Philidelphia?