The potentially 29 year project to revisit each album in Prince’s back catalogue year by year continues. And, to be honest, living with his self-titled second album (what?! You self-title your first album, not your fricking second!! Jesus absolutely nothing about this album is quite right!) for a year has felt more like a slog, an irritating inconvenience, than the wonderful dissection of genius that I’d hoped this project would be.

I thought 1978’s ‘For You’ was an extremely accomplished debut, if chronically unexciting in places, that nonetheless showed occasional hints of real talent buried deep beneath the beautiful if uninspired orchestral arrangements. The real disappointment with ‘Prince’ is that, despite it probably being a better and more accomplished album than its predecessor, there doesn’t seem to be much desire to push his sound further and evolve much from his debut. If anything, it’s basically a simple reworking of his debut with eyes on making his sound more commercial. As great as it is in places (and, as we’ll get into, it really is great in places), there’s an ever so slightly mercenary feel to ‘Prince’, it must have felt to most observers in 1979 that this shy little weirdo from Minneapolis was obviously happy to just keep releasing the same album again and again, perhaps with slightly more commercial styling than last time.

Which points to something that Matt Thorne diagnoses in his essential ‘Prince‘ book, Prince was just so desperate to please everyone at this point in his career. All he wanted to do was to make the music, craft the image and give off the impression that’s most likely to appeal to the most people. He was some weird little kid from some weird town in America that nobody cared about that was a long way from LA or New York, he obviously just wanted to prove that he deserved to be considered alongside other soul or funk acts (at this point, Prince has occasionally dabbled in the odd rock song, but was usually very happily working within his genre) that had made it big through more traditional means and from more traditional places. He obviously thought that it was best not to rock the boat too much, feeling that his background already made him weird enough and that his best chance of standing out would be to try his hardest to sound like everybody else. He was still just the guy who could play a lot of instruments, an anecdote first and artist second. In 1979, you might have predicted moderate success in the future for someone so talented, but absolutely nobody would have guessed that in around 12 months time he would release an album that near revolutionised the entire music industry.

The production of ‘Prince’ also points to the fact that it may be a little (whisper it) second rate. Prince was obviously desperate to produce more of the stuff that he did on his (150’000 selling) debut album. It was recorded in a fifth of the time and on a far lower budget. However, the fact that it doesn’t sound like a markedly inferior record than ‘For You’ may have convinced Prince that he needn’t spend such long hours in the studio, and that quick recording times might not be such a hindrance on his genius.

But I feel like I’m being a bit harsh on ‘Prince’- it is definitely a stronger album than ‘For You’, and maybe the lack of progression and commercial compensation is only irritating to me in retrospect because I know what Prince would soon be capable of (like, 12 months later!). The songs are frequently amazing, of course, because the talent of consistently composing incredible pop songs was very much already evident. In I Wanna Be Your Lover, Why You Wanna Treat Me So Bad and I Feel For You it gives us three Prince standards (although, let’s be honest, the three tracks you always skip on ‘The Hits’). Then, wow, When We’re Dancing Close and Slow. To my mind, Prince’s first work of undisputed genius, the first song of his where I would judge the material (‘Sex Related fantasy’ and all) doesn’t just match the gorgeous production, but even surpasses it. I should give you fair warning that I have such a soft spot for Prince’s soppy songs. Not a fan of soppy songs in general, a bit too soppy for my liking, but when Prince does soppy somehow his very presence bolsters the song’s legitimacy and makes it actually affecting, rather than just the wishy washy bullshit it might descend to in other’s hands. Wait until 2028 when I get to tell you how much I love Arms of Orion. 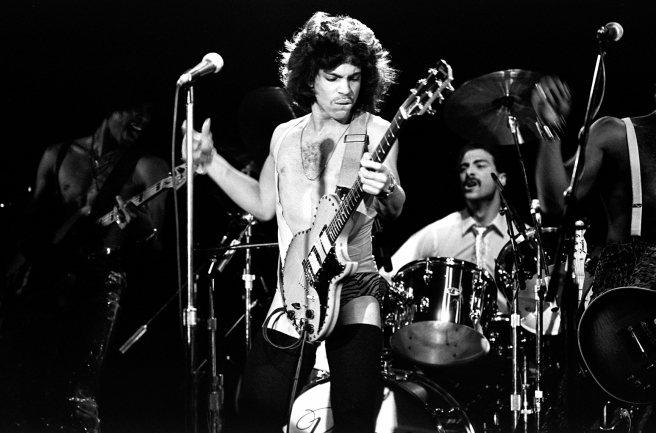 And then there’s Bambi. And then there’s Bambi. First, the positives: it’s absolutely stonking song, more evidence to put alongside ‘I’m Yours’s I’m Yours of how thrilling early Prince was when he tried his hand at the rock genre. It’s also an early suggestion of the sexually complicated places that Prince would better utilise to thrilling effect on his next album. However… the lyrics are… problematic…

Bambi is a young girl Prince has taken an interest to. However, he is distraught to find out that ‘You had another lover and she looked just like you’. Is that too vague? Well, in the chorus he spells it out: ‘Bambi, it’s better with a man’. Yeah, the songs about Prince finding a lesbian and offering to ‘cure’ her. With his dick. And- holy fucking Christ, I shit you not- it ends with the lines ‘Bambi, I know what you need/Bambi, maybe you need to bleed’.

And Bambi wasn’t some awkward little early misstep that Prince brushed under the carpet as soon as he could, it appeared in his live act sporadically throughout his career. Shit, he played it on Ellen in 2004!! Prince, what the fuck is wrong with you!?

Anyway, next year, Prince changes the world. For the first time.