OK, let’s just quickly get this out of the way: this is definitely Bongiovi “Bon Iver” Iverlenko’s weakest album. OK, OK, OK, I never listened to his second album as much as I would have liked, but… yeah, this is his worst. Actually, his second album was self-titled, which as I’ve previously mentioned I frigging hate, so… maybe… that takes it down toooooooooo… No. No this is his worst.

‘i,i’ was actually dead last on this list for the longest time when I first heard it, before Chance the Rapper’s ‘Big Day‘ redefined and lowered the bar on what dog shit I’d let onto the countdown. When I first heard it, I hated it. It sounded like a poor man’s retread of his previous album- ’22, a Million’, one of the  decade’s legitimate greatest records- with none of the songcraft, little of its experimentation and fucking none of its autotune! Don’t you dare take my autotune, you flannelly fuck!! The more I listened to it though, little by little it began to climb up the ranking. New nuances presented themselves, little wonders that I hadn’t previously noticed revealed themselves to me like Bon Iver politely flashing me his genitals as I walked home through the park after dark. Even now, on roughly the 7’654th listen I keep noticing and appreciating things about this actually rather accomplished record. If this year continued for another 12 months (clerical error), could it eventually reach number one???

No. It absolutely couldn’t shouldn’t and wouldn’t. Even as I’ve grown to appreciate it more, all my original reservations are still very valid- ‘i,i’ does sound like a disappointing follow up to ’22, a Million’, it does sound like Mr Iverlenko is far too conscious of making a record that sounds like Bon Iver and that it could believably follow ’22…’. Aside from the stunning first song any experimentation with sound comes across as self aware and forced, almost always seeming tacked on after Mr Iverlenko noticed that he’d hurriedly written ‘WEIRD STUFF HERE’ next to the song lyrics, and it rarely makes much cohesive sense as part of the wider song/album. The thing is, a markedly inferior Bon Iver record is still always going to be one of the year’s best, ‘i,i’ probably came about because Bongiovi Iverlenko was trying to make a shit album, and this was as close as he got. It would have probably made a lot more sense if it was released before ’22…’, as it sounds like much more of a understandable bridge between his old style and that of that record, rather than sounding like a bizarre step backwards as it does. In fact, if you haven’t listened to either of them, listen to ‘i,i’ now.

OK, now never bother listening to this album ever again.

Yeah, see? Lower than all the other ones #Validated 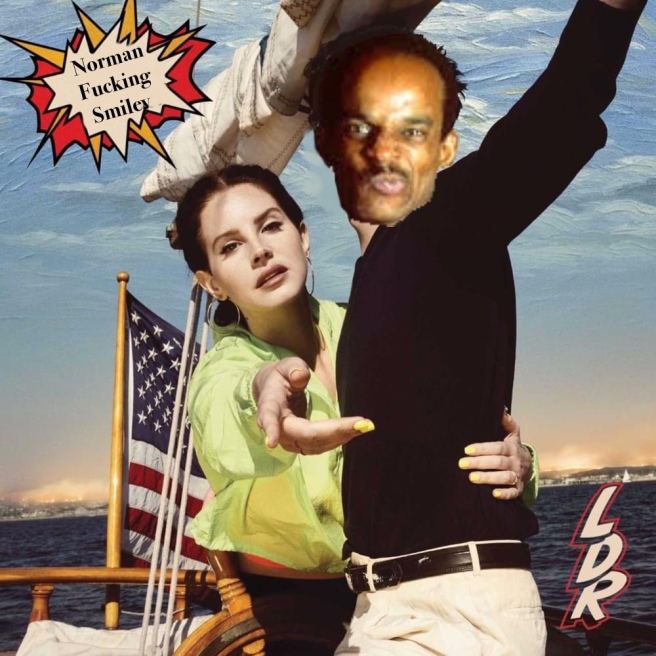 Let’s just be honest here, much as we all love LDR (and I’ve been nailing my fresh fuchsia flags to her pouting post since back when she was as widely hated as Josef Fritzl, which was actually a timely reference at the time) we can’t argue that she makes essentially boring music these days. That’s not necessarily a bad thing! You need the artists out there making slightly dull and ostensibly uninteresting music, it’s an important part of the market to cater to, what kind of world would we live in when only the music that properly stirred your bones existed? As a thought experiment, try and imagine what life would be if every piece of music made you want to dance, or cry, or fuck, or scream. When would we find time to get anything done?? No, you need the Lana Del Reys of this world making music that the only understandable response to would be to furrow your brow slightly as you take sips from a (far too big) mug of Oolong tea and gaze out the window dejectedly as you think back to all the red dresses that you used to wear in high school. It’s always raining, not necessarily a downpour but the kind of drizzle that makes one reflect on lovers passed. Remember Paul? He made you feel like a hero in his bright red Camaro. See? We get a lot more done with this kind of music existing.

I repeat, I am not criticising ‘Norman Fucking Smiley!’, it’s a pretty brilliant record and absolutely the best boring album of LDR’s career, especially considering her last album, 2017’s ‘Lust for Life’ was so lifeless and forgettable that I didn’t even remember to include it on that year’s Necessary Evil. ‘NFS!’ Is an admirable and extremely successful collection of songs, but so difficult to allow to probe the deepest crevices of your dark, dark heart. It’s always so reserved, always checking itself to ensure it doesn’t get too wild, that it’s difficult to show it anything of your own. It politely and steadily announces its own quality, to which the atmosphere doesn’t really allow for any more impassioned response than an enthusiastic nod. Furrow you’re brow, sip your Oolong, look at the rain. Remember Joseph? Back when he showed you the way in his red Chevrolet?

And that’s cool! Thank God that music like Lana’s exists! Next to, like, the properly great albums! Lana doesn’t need to excite and stir the gut, that’s not her MO, she fulfills very different needs. As she herself has (seriously) said: “My gift is the warmth I live my life with and the self reflection I share generously“. Thank you, Lana, for being so generous with your self reflection. I hope we will long enjoy it, sipping our Oolong, frowning at the rain, remembering Carter, who always made things harder in his bright red Dodge Charger. 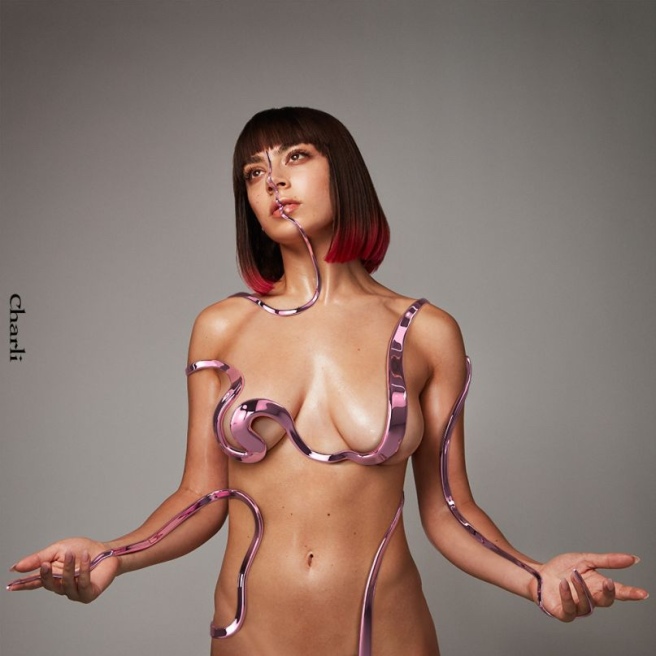 It’s Charli baby. When I wrote my (sort of) definitive list of absolutely (kinda) the decade’s best albums, I felt it important to clarify that the list was simply a reflection of the decade’s best music. I wasn’t ranking the works on cultural impact or influence or how well they pushed their particular genre further. This was all about the music, maaaaaaaan! And about the morality of paying your taxes. And wrestling, obviously. I didn’t even bother to rank the albums based on how well they relate to their times, how emblematic they are of the wider culture or epitomise the world surrounding them. This is a waste of time. The answer is always Charli XCX. Which artist is most emblematic of our times? Charli. What artist best exemplifies 2019’s musical attention span, with genres being adopted then dumped in the space of your average TikTok video? Charli. Which artist seems to personify the best dreams of a 2019 utopia? Making the the most of collaborative possibilities and never making distinctions about where any of their influences came from? Fucking Charli, motherfuckers!

Charli so comprehensively is pop culture and so overwhelmingly present in every discussion about pop music in 2014-19 that she will without fail be the answer to any question even tangentially concerned with modern times and legacy. Fuck, write anything you want into the form ‘Who is the most [ADJECTIVE] [NOUN] of [DURATION]?’ and the answer will always be ‘Charli XCX’. Who is the most mountainous refrigerator of The Private Aeon? Gotta be Charli XCX, no? Who is the most highfalutin magazine of The Age of Eradication? I mean, come on, that’s obviously Charli. The most unlikely imagination of The Era of Rage? Jesus man, that’s Charli XCX’s Tinder profile! Her omnipresence is such that in 2015 Northampton Reptile Centre did a list of ’12 Awesome Pet Amphibians’, and guess who came top?! Go on, guess!?!? Fucking GUESS?!?!?!

It was the Pacman Frog. Yeah, look at that baller, Charli can’t compete with that. That joke only goes so far, y’know? Grow up, for fuck’s sake.

[Quick aside: I just got home, took my coat off and then went to take the bins out. I forgot that my keys were in my coat, so I got locked outside without my key fob to let me back in the building. My neighbours across the hall are in, but they’re obviously hung over, considering last night involved getting a takeaway at 3am which woke me up and I got out of bed to answer because they rang the wrong doorbell. Despite this, they are refusing to answer their doorbell because they are lazy cunts and are instead going to have me stand outside in a t-shirt on the night of December 12th. I am writing this entry as my fingers slowly freeze to death. I might die tonight, I’m unlikely to survive the cold, but at least I’ll die making a point about man’s inhumanity to man, so I’d quite appreciate a death that makes a statement. You know what your death will mean? Nothing. I win, yet again]

Charli XCX even represents the less positive aspects of The Everything, pop culture wise. I mean, Charli is a white girl from a comfortably well off background who made it big by latching on to the coolest trends in black American music. That’s kind of everything now. Remember Iggy Azalea? Yeah, that was both the extreme of what Charli represents and also completely her fucking fault. Charli also plays her part in young singers recently pointlessly (and, trust me, inaccurately) glorifying a past that they’re probably too young to remember, and yet one that’s so recent and fucking nothing that it’s not even worth the effort. Only worthwhile to maybe capitalise on the most pathetic nostalgia possible.

“Heeeeeeeeeeeeeeeeeeey! I remember that blockbuster movie that everyone fucking remembers! Life was so much better when I was a kid, eight year olds these days don’t know they’re born!”

Really, Charli, you want to go back to 1999? When you were seven years old? No shit life was easier. So… ‘In my room singing Michael Jackson’… You’re going to keep that line in despi…? No, yeah, cool, no problem… that’s… yeah, cool…

[The lazy bastards across the hall got out of bed and pressed the fucking button in their house that let me in the front door, after being outside for two hours. I didn’t die immediately, but I’ve probably got pneumonia now so I imagine that’ll finish me off in my condition. Did I prove a point though? Yes. What point exactly is a little too complicated to explain]

Also, the fact that despite being present and central to every major pop cultural event of the past decade, like a sexy mix between Stan Lee and Forest Gump, Charli still sells next to fuck all records still works as a parallel for our times. Have you noticed that in the Tennies™ nothing’s as good as it should be and despite all your work you still earn next to no money? Charli called that!

You know what? This really should have been its own blog entry. I forget how much I love her and love talking about her. Even when I’m not actually talking about her, instead out of context just claiming that women enjoy getting raped. In fact, even in context… that was a ‘brave’ post, wasn’t it…?

Yeah, anyway, Charli’s back with the Sound of the Future™, as in it’s not really the sound of the future, but it’s just branded that way. It’s frequently flipping amazing, it’s too often skippable filler. I can’t wait for the next album, she’s amazing.