By many definitions of the word, I’ve been ‘clean’ for about three years now.

By which I mean I no longer drink alcohol. As for other drugs, I’m fond of saying that “I’m either never high or high all the time, depending on how you look at it” due to the cocktail of prescription drugs I consider essential to my psychological upkeep and the fact I’m a stone cold banter merchant. However, as wry and cheeky as the statement may be, it’s not strictly true, and a far more accurate statement would be “I’m either never high, but sometimes really fucking high, or high all the time, and sometimes really fucking high, depending in how you look at it”, as I still enjoy recreational drugs. Because of course I do- drugs are awesome. Kids, just say ‘yes’. If more kids tried drugs we’d have far less problems in the world as potential alcoholics discover a cleaner way to search for the experience of another body. I mean, yeah, sure, we’d have a lot more heroin and crack cocaine addicts, but you’ve got to break a few omelettes to make a good egg, or something

I used to drink a ridiculous amount. Have you ever read an article by a columnist claiming they used to drink ‘far too much’ because they would drink half a bottle of white win every other evening and would think nothing of up to three gin and tonics on the weekend? I find those articles laughable. I honestly can’t remember ever having less than two bottles of wine at a time, as any less than that and the personality altering effect just wouldn’t have the required effect. The amount I drunk was only ever limited by the amount of money I had, and when I was married to Samantha she was kind enough to sort out all the boring stuff like bills and rent so I could spend every last penny I earned on booze. At the start of the month, it’d be slapped down on the local cheapest bars, but towards the end of the month when funds got tighter I’d be forced to move onto three bottles of red wine for a tenner and then four litres of Stongbow for a fiver (often followed up by four further litres as it approached 11pm and I became horrified at the idea of perhaps being forced to stop drinking as the shop closed). I wanted to drink as close to 24/7 as feasibly possible. Even when I wasn’t working I managed to find a way, as if you’re addicted to something you’ll always locate a workaround. The Co-Op next to our house still bizarrely accepted cheques as payment, because this was obviously the mid 1970s, and so I would just stock up on booze there and write cheques that my bank couldn’t cash, running up ridiculous fines but, most importantly, always being able to get pissed. When I moved to China, I was (relatively) rich for the first time in my life and alcohol was served 24 hours a day. I drank all the time and it led to me losing my first job. When I moved to Xinjiang my drinking didn’t get much better, until I met Hejjy, who was the first person to ever really convince me that my personality sober might have had some quality and my drinking decreased to the level that newspaper columnists decry and doctors still consider chronically bad, but it was as close to sober as I’d been in a long time. Then I moved away from Hejjy and fell into a deep depression which saw me drinking as close to constantly as possible. The drink didn’t help the despair, only magnified and maybe distorted it. It was in this period that I crippled myself in a suicide attempt. I was so drunk at the time that I don’t really remember it. However, I never ate when I drank, so I was in amazing shape.

I drank so much because of an misunderstood and undiagnosed mental condition, and between the ages of about 15 and… very late 20s… spent literally all my money on booze trying to self-medicate. I did this because- and I’m not saying this is the reason that everybody drinks* but it was definitely my reason- I absolutely hated the person I was and being sober rather unreasonably forced me to confront and live inside that disgusting and pathetic person. Getting drunk offered me the chance to visit Mr Benn’s shopkeeper and try on a different costume.

(*But it so is, and I’m a freaking medical genius for pointing it out. If you took into consideration how much you drink then it would correlate nicely with how much you hate yourself and how difficult you find the stress of living inside your own skin. I am, of course, much better than you for recognising this and stopping. Much like Jesus saw the Jews drinking in the temple and… wait… what was it that Jesus did? Washed prostitute’s feet? Was he the one who could talk to fishes? He could talk to fish and bread, right? Could he talk to wheat or did he have to cook it and bake the bread first? Was the wheat conscious of being placed into burning ovens?? Jump in anytime, this is a good theological discussion)

It got to a stage where I was drinking so much and trying on so many different costumes that I began to both forget and deny who I actually was, it had been so long since I was neither drunk and hung over that I had no idea what the actual sober Alex Palmer could possibly be like. I kinda became a compulsive liar. I say ‘kinda’ because I drank so much that by this point I’m not even 100% sure how much of my personality-building anecdotes and attributes were actually true, and much of what I now accept as true about myself likely started as a lie that I told so many times that I just started to believe it. For example, it was only an embarrassing faux pas at a recent pub quiz that first alerted me to the fact that it was actually ‘The Last Emperor’ that won the 1987 Academy Award for Best Sound Mixing, not myself.

I married Samantha, but near enough everything I told her was a lie, so that by the time we divorced she still didn’t really know anything about me. Which is probably how I wanted it. I told her that I was brought up Catholic just because I thought it made me sound more interesting. She’s now married to one of my  childhood friends. They’ve both cut off contact with me, but I occasionally cringe at the thought of the ridiculous house of cards I built for her tumbling down every time my name comes up, which, – hopefully and realistically- isn’t much. 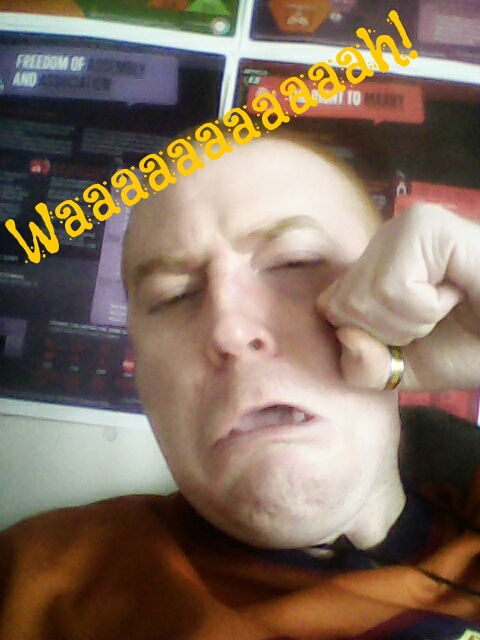 So, and excuse the hippy nonsense, I stopped drinking so that I could attempt to find out what my actual personality was. For all my adult life I’d taken the executive decision that my actual personality isn’t fit for purpose and so handed over control to alcohol at every possible chance. The times I wasn’t drinking were usually when I was hungover and hating myself, and the only thing I really remembered from my childhood was hating myself. About three years ago I discovered that, maybe, I didn’t actually hate myself anymore, so wondered if I could like without the crux of alcohol.

And, yeah, I’m fine now. It’s no biggie, just that the cons of drinking far outweigh the pros, so I just stopped drinking and now I feel a lot better and can waste my wages on computer games instead of booze. I don’t miss it, and so far haven’t been tempted back to it.

However, there are definitely two major drawbacks to sobriety:

Seeing Sophie Allison live kind of confirmed to me that Soccer Mommy’s songs aren’t quite up to the undoubted star power of the singer. Also, she mentioned BandCamp on stage and nobody in the crowd reacted to it. I just want to use this opportunity to say sorry to Ms Allison, I really should have given her a whoop or something, but I was on my own and far too shy. I should have brought a few beers beforehand. I also heard her absolutely majestic cover of I’m On Fire for the first time