We hear a lot about how we’re losing a lot of our privacy in the modern world, how Cambridge Analytica and Facebook are combining (with possible help from Vladamir Putin) to erase all semblances of the private life that human’s have cherished so for thousands of years.

In fact, the whole idea of ‘privacy’ is a relatively new notion. For millions of years humans didn’t have a ‘private life’, every fucker knew every other fucker’s business. Every village or town or Baptist* church was like a WhatApp group of chronic oversharers. You know when Dorlittle Pickswabble from across the street was on her period, you knew that Calimarin Topfunk the butcher had to sit down to wee, you knew that the Fiptiddle twins would occasionally get bored and fuck each other because what the fuck else are you supposed to do in the olden days? The concept of ‘TMI’ didn’t exist. Everything was just ‘I’.

(*Were we Baptists? Somebody was Baptist? Is Baptism, like, the old style religion? Was it like the skiffle of Christianity? What’s Baptism? Am I a Baptist?)

As a side note, that phrase is first thought to be coined by Queen Victoria herself in 1840. Prince Albert is said to have took her to one side and mentioned how it was really starting to sting when he urinated, and he was wondering whether her birthday present to him was a mistake.

Her majesty is said to have replied: 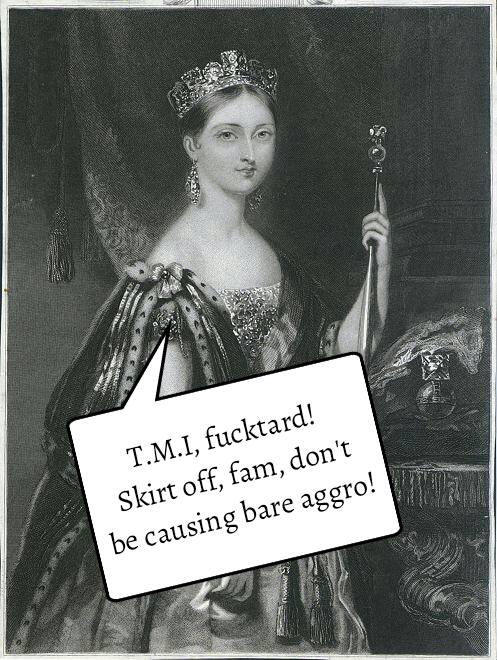 Historians have debated whether the ‘TMI’ i this instance actually referred to the ‘Timperly Musical Indolence’, which was the young queen’s favourite music hall show at the time. This is possible, but the dates don’t really add up- Sir Baldington Fucktard didn’t join the TMI until 1843.

Even the concept of diaries being private is a recent indulgence. Young women who married and moved away from their family often sent diaries home to their parents as a way of maintaining kin relations*. When you had friends over you’d often invite them to read your diary, because, as I said previously, there really was nothing to do in the olden days beside fuck your sibling. At the end of the day, Victorian parents would read their children’s diaries aloud to them, because Victorians were fucking weird! There was no need for privacy, every experience had to be shared, it was how we freaking evolved. Human’s have always desired to use media to leave some trace of their pathetic lives, from cave paintings to MySpace pages to blogs about the year’s best music that nobody reads. It was only when everyone (cough, in the Western world, cough, privilege siren) started to gain the ability to leave traces all over the freaking show that ‘privacy’ really became a thing.

(*It’s not known how many of these diaries informed the parents that ‘Ain’t nothing wrong with a little dick licking’, but I’m going to guess that it wasn’t many. Like, seriously? Probably none, when you think about it)

Some reviewers have noted that the question of privacy and personal space, along with issues of consent, is a central theme of ‘Sextape’, a wonderful EP (well, one song) that uses recorded conversations of people talking about memorable, funny or fucking disturbing sexual experiences. I think that’s a valid reading, and ‘Sextape’ is a legitimate work of art so any tosser can read it however he or she wants. However, I always get a different, much simpler message:

Which, y’know, fair enough- men are gross. I honestly believe each and every man only exists as far as they can contain their own grossness. Every man has a tight ball of gross thoughts and ideas spinning around his brain and (more frequently) their sagging genitals, and their success in life is centred around how well they repress this gross core of their being. Some men get so successful that they feel like they no longer need to repress these gross urges and… well… We’ve seen a lot of that recently, haven’t we?

But also… since we’re kind of tangentially on the topic of #MeToo… what about…?

Almost every sexual anecdote (sexedote? Anexual? Bollocks… I can’t make that work…) involves the audacious and persuasive attempts of gay men. Even on one of the (very, very few) stories involving a woman and a man, the woman concludes the tale by stating “I think he was gay…”

Is ‘Sextape’ a commentary and conversation about the lack of a #MeToo movement in the gay community. 62% of gay men have been groped in a bar without consent, while 40% of gay men (47% or bisexuals) have experienced sexual violence other than rape. This is understandable, because gay men are, on the whole, men, and men are (wait for it, wait for it, WAIT FOR IT!) fucking gross.

“There’s a culture of silence, and it’s not difficult to understand why. Recognising the sexual violence you have experienced isn’t always easy, especially when these are some of your earliest sexual encounters, or when memories are clouded by alcohol and drugs”.

Is that what ‘Sextape’ is about?? Is it an attempt to turn a spotlight on sexual abuse in the gay community, something that is being swept under the carpet??

Ooooooh, look at us! Having a proper debate about a piece of art’s meaning!

‘Sextape’ is an amazing piece of art, endlessly debatable, and the second album on NE2018 to say ‘faggot’.