I used to hate the cover of ‘Princess’, I used to think it looked cheap, sordid and…

…this isn’t working, the picture’s too far up the page, I want it to be right on top of the writing as I’m dissecting it, y’know? 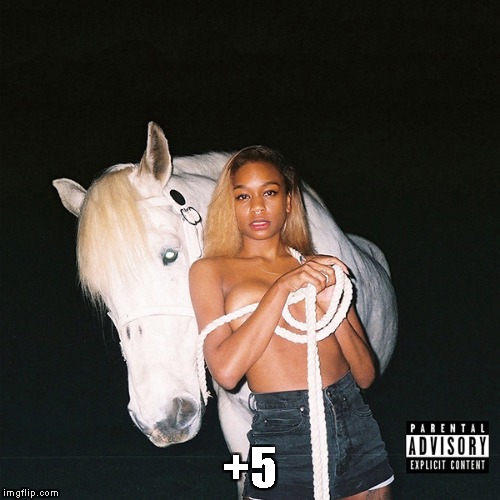 Great. I used to hate the cover of Princess: I used to think it looked cheap, sordid and nauseatingly sexualised. ABRA herself has the look in her eyes of someone who would happily pose naked with a horse for a scuzzy camera phone shot for the $50 that will guarantee one more blast of whatever it is she needs to extend that clouded over look and suspend any real contemplation of her miserable situation for a while longer

Then, I got it

and the ABRA whose existence we glimpse into on the cover is the same debauched, degenerate yet defiant character that we spend a rather disturbing but nonetheless perversely provocative 22 minutes

It’s a grotty, borderline vile cover that, despite every bone of human decency in your body rejecting the proposal- you can’t help but find a little sexy

The absolutely perfect EP inhabits a dank and slimey underground, that still manages undeniably sexually appealing. It’s a world of sex being sold cheap to fund the continued use of the dankest drugs, and a woman who sees nothing morally wrong with enjoying both the purchase and the currency

ABRA is perhaps described, a little too basically, as a female Weeknd, though while Mr Knd chose to document the debauchery and emptiness of the highest

rollers, ABRA is rolling around in the muck and defying us to tell her she shouldn’t enjoy it

Musically, though, I’m not sure The Weeknd has ever sounded this good: low-fi without ever sounding cheap or insubstantial, and obviously influenced by 80s goth-synth without ever being too in thrall of it. Now, I need to have a quick wash…

as though He was fond of a bit of slap and tickle, he never made it sound quite so debauched

Strange, it seems that artists who are too ‘urban’ (or too whatever King Dude is

) never make it to Metacritic

Paying attention, Drake? If you’re album was this short it’d be one of the best of the year

Best Lyric: ;Let’s imagine for a moment that you never made a name for yourself/Or mastered wealth, they had you labeled as a king/Never made it out the cage, still out there movin’ in them streets/Never had the baddest woman in the game up in your sheets’ +1

Not quite ‘AMAZING, though the opening track is 62 seconds of perfection