‘Athena’ is one of my favourite sounds. It’s the sound of an artist who has long been considered worthwhile and interesting deciding that, actually, they don’t just want to be considered ‘worthwhile and interesting’. It’s the sound of someone whose music may once have occupied the ‘You Might Not Have Heard…’ sections of reviews now putting forward that they should be covered in the highlight pieces. It’s the sound of an artist that may have once been cool to namedrop because few other people had heard of then wanting other people to have freaking heard of them! 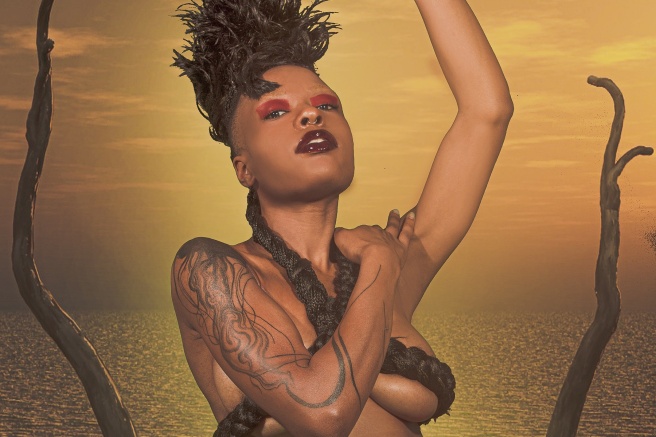 I was a fan of the weird and discordant afro-futurism of Sudan Archives’ previous EP ‘Sink‘, but even in my praise I seemed to want to ghettoise her music by claiming that the best case scenario for it would be to be overplayed at artisan coffee shops and inspire several NPR beard strokes. It was very, very good, but there was a ceiling on exactly how good such beguiling and esoteric music could be. And also how big it could be- once it gets into those artisan coffee shops, there’s really nowhere else for it to go.

Which is why ‘Athena’ was such a bracing yet gorgeous kick in the testicles to receive. On it, Sudan states with certainty that she no longer wants to be regarded as simply a radical world jazz fiddler on the fringes on music, why can’t her weird violin playing and sounds inspired by African folk music be mainstream?? She didn’t do this by radically upending her sound, or even by changing the characteristics of her sound to any great degree at all, but just by strengthening the songs at the heart of her sonic experiments so that her music can now be appreciated both as exploratory sonic agitations and as banging soul/R&B. Basically, it’s Britney Parks selling out, if you wanted to look at it like that. If you did, you’d find that ‘Athena’ is as beautiful a reason for selling out that’s ever been produced. I prefer to look on it as Sudan taking cues from the mainstream and incorporating it into her own sound, without losing anything of the obtuse strangeness or startling radicalism that first made her so intriguing. She’s simply taken all of the things that were already so brilliant about her and framing them all through the vision of modern soul and R&B music, and creating something fabulously new in the process, something that still sounds like nobody else apart from Sudan Archives.

“I researched that Iceland moss is one of the softest mosses. I had a friend visiting Iceland who had heard about the song. I was like, “Is the moss really soft out there?” He’s like, “Yeah it’s super soft.””

See? People often ask me, “Alex, you sexual Roman Candle of forever spurting excitement, how could I ever be good enough to be featured on Necessary Evil?”

I simply point them to the previous Sudan quote and inform that, to be at one with your art to the degree that merits a place on this list, upon hearing that a friend has recently visited a country your first question should always be “Is the moss really soft out there?”.