Christ, that line could actually about the Phew album couldn’t it?? Hang on, is that racist? I feel like perhaps that’s racist. Scrap that last bit…

Aaaaaaaaaaah! My God, Andy Burns, I love you so much! After struggling with the jagged angles of the- at times- freaking horrendous Phew album, I can’t tell you how relieving it was to come to an album as congenial and easy to listen as ‘Excited’

It’s a very different sort of art than Phew. Burns knows exactly what notes to hit and what tricks to pull to make his understated and accessible indie pop as lovable as possible.

Does this make it a some how less ‘legitimate’ piece of art than Phew’s obstinate complication of an album?

Pffff, yeah, maybe, probably. Who cares? ‘Excited’ is a hell of a lot more enjoyable. 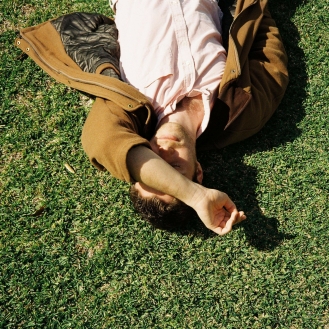 As you already know, Prince is the only artist to have two albums on a single Necessary Evil countdown. For an artist to achieve this astonishing feat, he or she would have to release two brilliant records in the same year that are categorically different from each other. Unfortunately for Mr. Burns, he doesn’t quite achieve this feat, as I consider ‘Good Grief’ to be mostly similar to ‘Excited’, just (in my opinion!) slightly inferior. Buy them both though, make your own decision.