OK, this has really pissed me off: look at the cover of their debut album:

Now look at the cover of ‘Wee Dirty Birdies’:

but I remember their first album, because they were a relatively big deal towards the end of the last century seeing as they were made up of two hideously geriatric old men who claimed 100% responsibility for ‘Nevermind’ and fronted by one of the world’s greatest gingers who packed enough personality to successfully combat the dangerously toxic scent of boring old Dad rockers. I was knowledgable enough to remember its cover, so seeing how their sixth album was presented I excitedly assumed that they’d kept up an admirably consistent aesthetic throughout their 54 year career

Wait… Butch Vig and The Other One were fucking geriatric when Garbage started! How old are they now!? Ew. Ew, ew, ew. Ew

But frustratingly, a quick glance at their back catalogue reveals that they spit in the face of visual regularity! I mean, sure, they released ‘Not Your Kind of People’ in 2012: 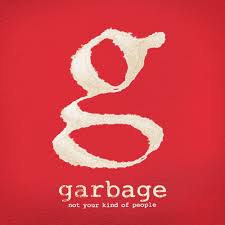 which at least keeps up their Original G demeanour, but they also released shit like this:

‘Original G’, that was a fucking brilliant line, I’m absolutely wasted on the seven people who might read this

It can ocassionally threaten to get just that little bit too silly, but I’m always a fan of artists attempting even minor stylistic adjustments late in their career, and ‘Dirty Wee Birdies’ is at the very least as justifiably existent and relevant as a thousand Pixies albums

Is the last song just the fi**rst track but played on Ukulele? No -1